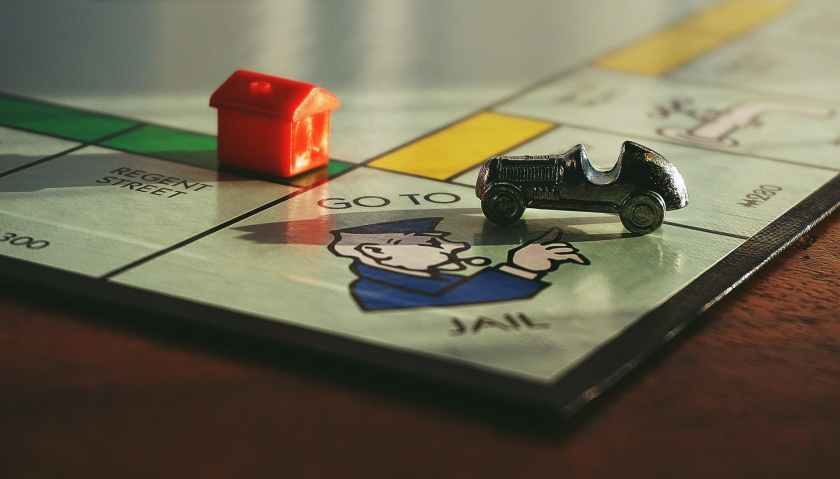 It was a joke. I was in Target with my wife and saw the board game across the aisle. I couldn’t NOT get it. But, Monopoly: Socialism might be the best Monopoly game I have played.

Before now, that honor would have gone to the Lord of the Rings Monopoly (because it ended when the ring reached Mount Doom after the Eye of Sauron, which replaced a 1, moved it on from Bag End.

Fun fact: the original Monopoly was designed to display the evils of capitalism. Instead, Americans lapped up the game in which the goal was to make an obscene amount of money while bankrupting your fellow players. This game may poke some fun at socialism (usually with references which are more akin to communism), but it feels much more loving. This game does not appear to be displaying the evils of socialism because the main goal of the game is that the players work together to build the community they share.

This process starts very slow. There is NO money in any player wallet to begin with. Instead, the community fund is all you have– 1848 Monopos (what we called the new Monopoly dollar sign) as a reference to the year the Communist Manifesto was published. If this money ever runs out, you and your community fail and you ALL LOSE. If a player needs to spend money on anything (except for getting out of jail), it comes from the community fund. This can be dangerous if you over-spend and draw the worst of the chance cards.

There are a few differences in play that make things more interesting. While one die is normal, the other has some stickers which change play. (Also, note that the board is smaller for those who are used to skipping to specific spots.)

While you still get another turn if you roll doubles, there is also the 2x side which multiplies the regular die, and the +1 and +2 sides which draw more Chance cards. The nice thing about this is that regardless of how many you draw a turn (up to three if you land on a chance tile), you only play one.

The point of the game is to become the manager of projects and ensure that they are funded. The need for funding is marked by circles on the card and you mark them as funded with the socialist rose tokens of your color. Once all ten of yours are gone, you win. (But no one loses.) When someone is on the project tile, they can contribute for just $10. However, the owner of the project can pay a higher amount during their turn, regardless of where they are located on the board.

Or it might be a communist cabbage. Who can say?

And one of the nice things is that you don’t feel bad for contributing to each other’s projects because the more money in the overall system, the more money will be made still. If I help fully-fund another player, they have enough money to help fund one of my projects later, which means I will get more money too.

Also, and this is important: THIS DOESN’T TAKE FOREVER.

I imagine there are people who screw over their own community quickly, but if you actually play as a community, you will all survive. Though only one player wins, it is because they contributed the most to the community.

Overall, this feels like a more fun version especially because of the cooperative aspects and, though it was a joke buy initially, it was totally worth it.